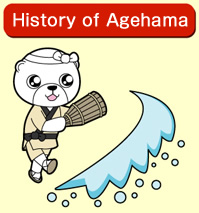 Salt production was started in the first year of Keicho (1596) when Toshitsune Maeda, the third generation feudal lord of Kaga clan, established the "Shio-te-mai system" (a system that Kaga clan gave rice to farmers who had a few farmland and collected salt, instead) for the relief of farmers and encouraged them to produce salt in the areas of the Noto district. In the Noto district, people have continued salt production for more than 400 years by observing the technology of Agehama.

There are two processes of salt production; the one is the "Saikan Process" that concentrates seawater with use of sunshine and wind, and the other is the "Sengou Process” that produces salt by boiling concentrated seawater. In Enden, they apply the "Saikan Process".
* Enden means a land for producing salt, and over the bed locks of the land clay is paved, on which sand is covered.

Salt production technology has basically been developed as follows.

This salt production method was carried out during the Edo period since the end of the Heian period.

Clay is covered on the surface of the salt farm on which sand is sprinkled. Seawater is carried in a water pail from the beach to the salt paddles and sprayed. This time, the sand is stirred to speed up its evaporation. To dry the sand in the wind and solar power, spraying and stirring are repeatedly performed. The sand having adequate salt is collected in the swamp well (is also called “Tarefune”. A well for collecting sand and draining salt from the sand), in which seawater is poured to wash out salt from the surface of the sand. The concentrated seawater can be obtained in this way. This dense water is put into a flat pan or open pan, boiled down to produce salt crystals.